Even though I haven’t thought of this hymn for a long time, the prompt Earth brought it to mind.

For the beauty of the earth,

for the glory of the skies,

for the love which from our birth

over and around us lies;

Lord of all, to thee we raise

this our hymn of grateful praise.

Not too hard to see how my mind went to pictures taken from airplanes. Being above the earth gives a sense of the planet that one rarely gets from earthbound viewpoints.

Yet the story of the planet Earth is more complicated than beautiful vistas of mountains and clouds. One of the ways travel has affected me is my understanding of the complexity of the world. So many things interact with each other, and often the results are not what “everyone” thought would happen. 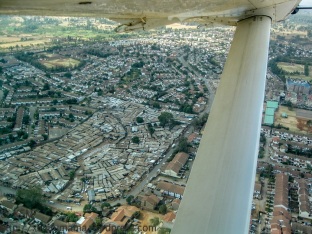 Top of the world: Canadian Rockies.

Great Wall of China, from above.

Top of the World: Alaska from the air.

This picture gallery shows a mish-mash of images of the Earth taken from planes. I included some that are not exceptionally good photos or pretty scenery to illustrate parts of the Earth’s story:

Nairobi Rooftops: you can really see where the poorer part of town is. This is also is part of the story of the Earth: These economic realities affect how we take care of the Earth.

Arriving at Kichwa Tembo: Masai Mara means spotted plain in Swahili, some of the spots in this picture are Tembo (elephants) and other animals, not trees. The story of the Earth is, at least in part, the story of its inhabitants..and not just human ones. Many of the animals at the Masai Mara  game park are endangered.

Patchwork Fields: this isn’t a great picture but it shows another part of the earth’s story: carefully laid out and cultivated fields in Europe (Ireland, I think). It contrasts dramatically with both the scenery of untamed areas, like the mountains in North America and escarpments in Kenya, and with the rooftops of densely populated Nairobi.

Great Wall of China: again, this isn’t a great picture, but the wall was visible from the plane window when we took off last fall. The Great Wall is just visible as a line on the landscape. Often (at least in my experience) it can’t be seen because the air is not clear. The great wall is endangered by the expansion of the Gobi desert, some of which is due to human activities.

The planet Earth is very beautiful, our hymns of grateful praise are deserved, but perhaps we ought to do more. At the very least our hymns could caution against taking the beauty for granted. Things are changing pretty fast.

10 thoughts on “For the beauty of the earth”