These are some street scenes. In my experience, which isn’t vast but also isn’t negligible (this was my seventh trip to China), these are typical of a Chinese city. Just like the markets have a wider variety of eggs and vegetables than one typically finds in the US, there is also a much wider variety of vehicles. 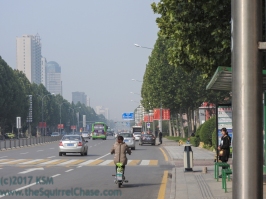 I sometimes wonder if Seattle would do better to look into some of these, instead of trying to get people out bicycling in the rain, up steep hills on the poorly maintained, bumpy streets. I’ve seen some clever, three-wheeled scooters and cycles that are more stable than bicycles and have some amount of shelter from rain.

Midsummer blues: Johnson's Blue Cranesbill Geranium.
A visitor in the tree.
Enjoying the sun in their new summer haircuts.
Nootka Rose on a drippy May afternoon.
Our native Nootka roses are blooming. I wish I could share the aroma.
More May flowers: a bearded iris.
Cool Esse
Travelling Nan's Wanderings
Artistcoveries

Discovering the joy of art