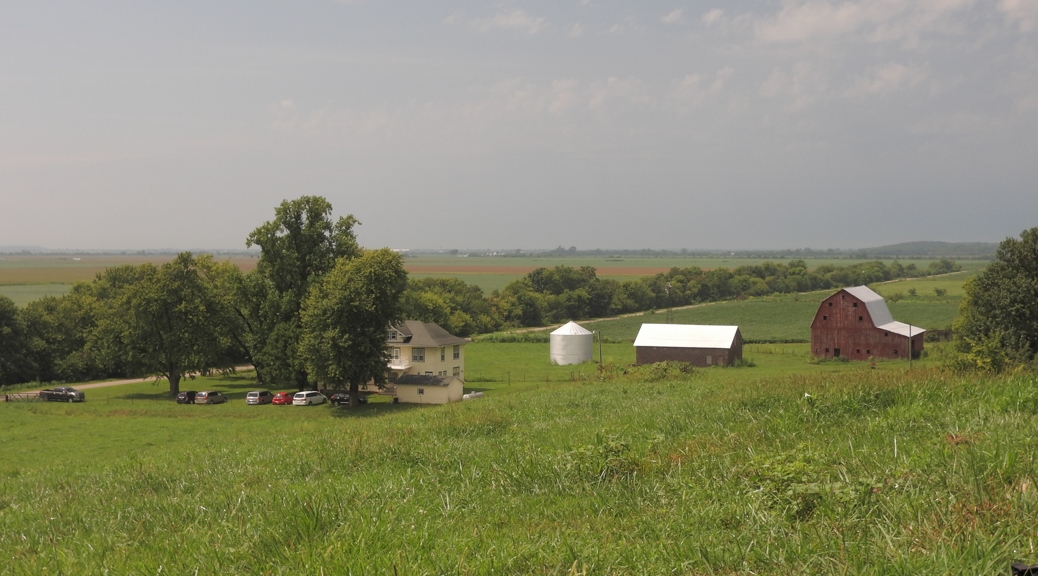 Going back through my August pictures I originally picked out 70 or so, don’t worry I’ve culled it down a lot. August was a busy month!

I just checked and I didn’t post at all from August 6 to October 19th. The reason for that is that my husband and I took an “ecliptic” trip Mid-August and we arrived home August 28th to my grandmother in the hospital and a letter from the VA challenging about 90% of the amount they gave her to pay for in-home care givers. By the time she was settled in a skilled nursing facility, I made copies of about fifty canceled checks showing she had used the money to pay for care, and got the annual paperwork for her Medicaid together it was late September and I was on a plane to China.

August started with smoke. Wildfires in British Columbia sent a haze down into the Puget Sound region. It was rather eerie. 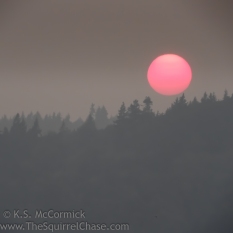 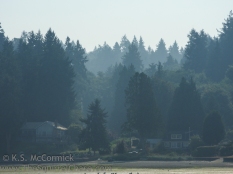 Smoke in the trees.

Toward the middle of the month we flew to Los Angeles to embark on the Southwest Chief train to Kansas City. While I wouldn’t rave about Amtrak, the company is fine but passenger trains in the US are old, the track is not smooth, the food is so-so, etc.; even so train travel is relaxing since all you have to do is watch the scenery. The cloud formations were pretty spectacular (I was awfully glad to not be out driving in some of those storms). 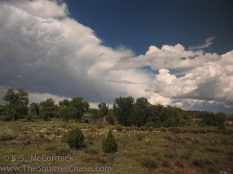 We had one day in Kansas City, our train arrived early in the morning and our son was flying in from China and his plane didn’t get in until late evening. We wandered about. But the highlight of our time there, highly recommended to us by my sister-in-law, and now to you by me: if you are ever in Kansas City go to the Steamship Arabia museum. It is unique in the world. I won’t show pictures here because a couple of photos cannot do justice to the experience. I will try to finally pull together a post about it soon.

We rented a car from the airport and headed out to the farm owned by my husband’s sister and her husband. It is still farmed by a cousin and was under the path of totality for the eclipse.

We stayed on the farm for a week and had a very nice family reunion, plus friends. The weather was stormy on and off and one evening we watched a spectacular lighting storm, as good as fire works. Lighting was shooting from cloud to cloud as well as occasionally darting at the ground.

Another thing worth seeing, not horribly far from Kansas City, is the Powell Botanical Gardens. They have two butterfly houses, an indoor one for exotics and a screened outdoor one that is focused on the local butterflies. Like the Steamship it really deserves its own post.

During the eclipse itself, I did not take a lot of pictures, at least by my standards. I wanted to pay attention to what was happening not camera settings.

I did however do a couple of smart things that allowed me to take a few good pictures. I bought a couple of sheets of the solar filter paper and my husband made custom filters that fit my camera and binoculars. Ahead of time I went on-line to learn what settings I should use for the different parts, then tested them out.

My camera is a Nikon P610 which is a bridge camera with a 60 times zoom, it has several mode options: P which is partly automatic but you can change a few things, A for aperture controlled, S for shutter controlled, M for everything can be changed and U which is a saved set of M controls. Since M remembers the last set of settings used, I was able to set U to be the controls I wanted during totality, M to be the partial eclipse with a filter, and I used P for taking pictures without a filter. That meant I could switch easily between the modes without messing about much.

One thing, mentioned on-line but you have to see to believe, is that the sun is as bright as usual until totality. These two pictures were taken a minute or so apart, the first with the solar filter shows how much of the sun is covered. The second, filtered only by the clouds shows how the sun appears without the filter:

Unfiltered view of the sun taken a minute after the filtered photo.

Another side by side shows the darkness approaching over the landscape:

My experimenting paid off, it looks like thousands you have already seen, but I was very proud of my little camera for producing this beauty: 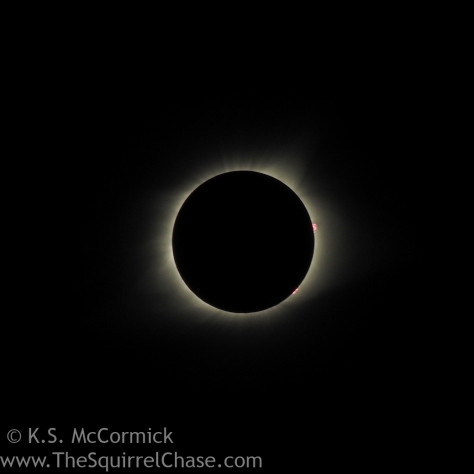 I got very excited when I realized I caught the solar prominences.

The day after the eclipse we headed back to Kansas City, dropped James off to return to China, then caught the Southwest Chief to Chicago.

Here is a view of Norborne’s water tower from the train as we sped by the next morning:

Chicago was never on my must see list. We had to overnight there because the Southwest Chief gets in an hour after the Empire Builder heads out so we had 23 hours. It’s a big city. It has interesting things to see and do, but it is a BIG, big, modern city. After a week in Norborne the big modernness was a little overwhelming. We took a river tour of the architecture and that was a very nice way to spend the morning. But it was nice to get back on the train heading for our last stop:

We visited Glacier for the first time in September 2016. This time we had just a couple fo days. The wildfire that devastated Glacier this fall was just starting and there was some smoke but the weather was glorious and the views were only slightly impaired. We made a point of visiting the western side of the park since in 2016 we only saw the eastern part of it. 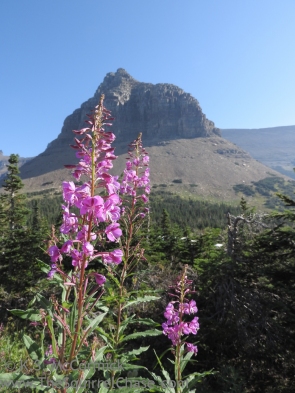 We were fortunate to see quite a bit of wildlife, even had a bear run across the road in front of our car as we headed back to catch the train home. We got home on the 28th.

One thought on “Twelve Months of 2017-August”

where observation and imagination meet nature in poetry