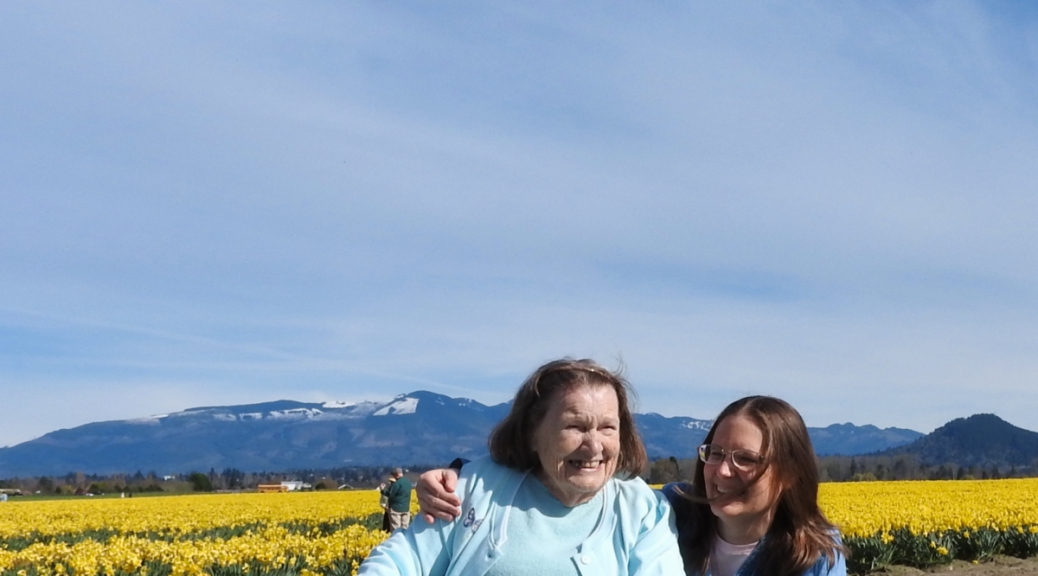 You can’t ever do everything. Sometimes it is too easy to decide that at some future point you will have it all together then you can start doing stuff. Being in relationship with the elderly you learn to let go of that. Tomorrow won’t necessarily be better than today.

You have to learn to do what you can when you can, and take the joy in those things, not regret what you can’t do.

It can be hard to know when to give up

When Grandma moved back to Seattle, in her mind it was for my convenience. She was not managing well on her own any more and the 1250 miles between our houses was a real drag. My car can probably still almost get there on autopilot. She was not getting adequate medical attention due to a combination of medical malpractice (Seriously, I think we could have won multiple law suits if I had had the energy to pursue them after getting her care. My blood still boils…) and being unable to get herself to medical practitioners and unwilling to ask for help.

Change is hard, on everyone

I think some of the insistence that she couldn’t go places when she first arrived was a bit of pique, but it was also fear. She was afraid of getting stuck and resentful about how much help she needed. I understood that; I was frustrated by it, but I did get it.

She gradually got bolder, in large measure because of all of the medical appointments we had. Her feet healed completely but it took about four months of meticulous care and many trips to the wound clinic (Shout out to the Polyclinic and wound specialists at Swedish). She got comfortable getting in and out of my car, and I learned how to park in places where she had the space she needed. I got a good deal bolder about not trying to park properly and just putting on my hazards and prominently displaying the handicap placard while I was loading and unloading her.

Create fun traditions to share time together and build bonds

Because, at first, she would only leave her senior living facility for medical appointments, we started little traditions that helped her feel part of our family: Wednesday nights we had hors d’oeuvres and wine and watched DVDs of old sit-coms.

On Fridays I went to lunch with her and did shopping. She liked having family sit down at the table with her and her friends (a bit of showing off, although we aren’t exactly lookers), and the ritual of having her shopping list ready. No matter what else was going on she could count on those two visits (three if you count arriving back with items).

Eventually, after her feet healed and we purchased her “convertible” (a walker that you could easily switch around into a light wheelchair), the Friday visit became an outing for a fish and chips lunch and shopping.

2016 was a good year for going with grandma

We were feeling like we had got this thing figured out.

In the spring of 2016 we took Grandma on two day trips to Skagit Valley to enjoy the bulbs.

We did have one hiccup in our day trips: on the second one we went to a fun restaurant somewhere between LaConner and Anacortes that was famous for “mile high” lemon meringue pie. Lemon meringue was grandma’s favorit so we couldn’t pass the place up. She went in to use the facilities, clearly marked as handicapped. But she couldn’t get herself positioned in such a way as to get back up when she was done. I tried to help but it was pretty tight and I was twisted around. Eventually I think both of us were trying to figure out how to get help and what it would entail…taking off the roof and bringing in a crane? We became super motivated and did manage to get her up. Ever after we were both pretty careful to pre-scope the facilities.

In May I finally was able to sell the trailer and property she had been living on and, in ignorant bliss, suggested that she could go down with me to finalize the arrangements. I wrote a lengthy post about that: Was it all a dream? It was worth it: Happy Days. It was a real boost to her moral to see her friends, even though the trip was extremely challenging for her physically…and my nerves were about shot.

The California trip changed something, for both of us. Grandma learned the lengths I would go to for her and realized in her heart what she knew in her head: that we weren’t trying to limit her access to the world. I learned a lot about arranging for travel with her from all of the mishaps. We both learned that we could get through tough stuff together and still have a good time.

We had joy, we had fun, we had a season in the sun…

My dad built a ramp and grandma was able to come to the island for family get-togethers with the whole crowd.

We also took a couple of weekend trips to Eastern Washington.

We were probably getting too sassy. Planning for a big Thanksgiving with everyone at my dad’s. Grandma and I planned the menu and shopped together. We had a great time shopping, and whether they sharing our joy or laughing at us people were certainly smiling at our contrived method of doing it together.

Alas the day after we went shopping grandma fell and broke her hip, necessitating surgery and a lengthy stay in a rehab facility.

It took us time to regroup and adjust to her new, much reduced level of mobility. But that is a story for another day.

I felt like we did a lot right during the period I described above.

The regular time we spent together made us much stronger as a family unit. Don’t get me wrong, we were always close. But my husband hadn’t spent much time with her. Their relationship strengthened and she became more comfortable accepting his assistance, that was a big help to me.

We got the most we could out of where she was at physically. We didn’t put things off, and we pushed the envelope a bit, like with the trip to California. It could have been a disaster (some might say that it was in some ways) but we made a point of having fun so it felt worthwhile, both at the time and afterward, even when it was being a challenge. The stress points eventually became good stories about an adventure and our self-confidence at being able to make things work grew.

We had fun together. That made us all happy. And, I believe, it made it easier when further changes were needed, because it built a trust that we wanted her to be happy and healthy and were not interested in clipping her wings just for the sake of it.

Note: I am working on this series about Grandma this month for Nanopoblano. I don’t know where it will lead.