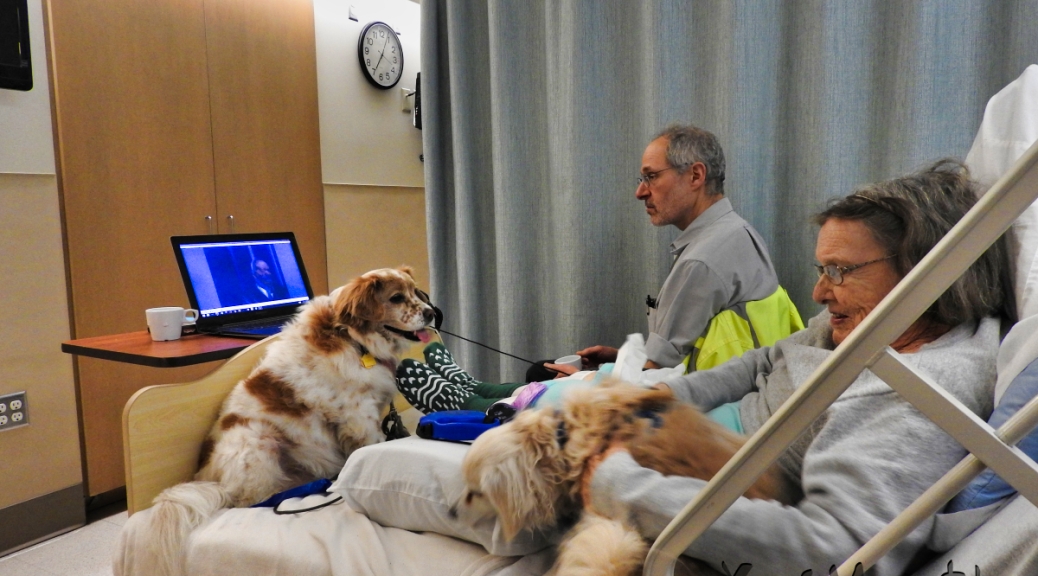 I am a rather intense person. I like to focus in and do things from beginning to end, and I really like to have a final product. Elder care does not lead to that.

When I realized how much of my life was being there for people, I knew I needed to have something other than “fixing things” or I would either go insane, get very mean, or both. Also, it is very hard to live a depression-free life when anything you want to do is less important than a dog sniffing a light pole.

I decided that I was not going to wait for grandma to die to live my own life. I didn’t want to poison our relationship with that sense of waiting. I did a few things that I really think helped me.

I took three week trips at least twice a year. Mostly I went to Asia, specifically China. My son lives there so I can stay for much of the time without paying for a hotel, making it more affordable. We also took trips to cruise around Cape Horn, a large loop of a train trip to see the eclipse and visit my husband’s family, and walked Hadrian’s Wall in England.

Grandma often seemed nervous when I was preparing to go away. It was the only time I ever felt like she was manipulative, but I emailed her pictures, always brought her something interesting, and she liked to hear about the trips when I got home. I think that it gave her something to talk about with her friends at meals. I know the break did me a world of good.

My grandmother’s hearing impairment was interesting: she was totally deaf in one ear and okay in the other, except for certain tones. Of course my voice was one she could hardly make out. What that meant was that her hearing was very directional. She might hear you well, not at all, or somewhere between. She was also good at guessing, based on the conversation, as she understood it, what you said. It was sometimes humorous, if you said hose, she might decide you said nose or rose.

She hated to ask people to repeat, so she would muddle along. When she was in the hospital this could be a problem. She couldn’t hear what they were asking her and would say “I’m fine”, with a cute little laugh, instead of saying she couldn’t hear the question.

I found that it was easier, and she got better care, if I was always there during regular hours (the doctors couldn’t come in without two sets of ears to hear what they had to say). I made sure the person talking to her was on her left side (by the good ear).While I was careful to let her speak for herself I could make sure she understood questions, and nudge her memory about some of the answers. Also, she was more comfortable admitting to me when she was uncomfortable, so I was able to get her help when she needed it.

The hospital stays were extremely tedious, so it was nice to be able to bring my laptop and work on assignments, photographs and the blog, as well as looking up the medical terms floating by.

One thing I did was to take classes through our community college. I took photography classes in person, then discovered that they have quite a few on-line courses. I took on-line courses in the LightRoom software for photo processing and in website development: WordPress, HTML and CSS.

Taking classes on-line is wonderful when you are on-call. All you need is an internet connection and you can have something interesting to do while you wait. Crosswords and Ken-ken can only go so far for killing time.

Using what I learned

As luck would have it I finished my first set of photography courses right before Grandma’s first major hospitalization. I had to drive the 1250 miles down to California starting the next day. I helped myself stay sane by getting up early and going out to walk the dog and take pictures in the desert before I went in to the hospital/nursing home and of the evening after (it was about 115 deg F during the day).

I have really expanded my photography and-post processing skills since then, and had a lot of fun doing it. Photography can be done anywhere, when you don’t have anything you want to record you can find an infinite number of ways to experiment with post processing.

One thing the photography instructor told us was to use the photos you take. Don’t leave them sitting on a tiny memory card. I took that to heart, and made a few photo books and a family calendar for each year.

Those calendars have been a good project: I give them to my grandmother and father for Christmas. They have pictures from all family members (I ask for submissions as well as using my own) and major events that happened during the year. They also have everyone’s birthdays on them. I waited until a Christmas-y event occurs (or I make a festive Wednesday night happen) before going to press so the whole year is represented. In the last couple of years there were falls and sadness toward the end of the year and the calendars helped us to all focus on the good things not bad.

I started this blog as part of the first WordPress class. It provided both practice in WordPress and a place to show off my photos. I started another one as part of the next class with the idea that I might somehow do something productive with it…but I haven’t yet really figured out how that might work. I do use it to experiment with CSS a bit and am starting to post some “how-to” type posts for people like me who can’t afford to pay the big bucks for fancy themes or professionals.

I think that it was very helpful to take the attitude that I needed to be doing something that was unrelated to eldercare, even when I didn’t necessarily feel like it. I have seen people put off living their own lives and it always seems to end in bitterness. We didn’t have that. Our last interactions, although electronic, were loving. Even though I was in China, my cell phone worked and I may have sent her, through her nurse, the last message from family that she consciously heard.

The travel, classes, photography and blogging all worked together to keep me engaged in my own life. That enriched our relationship and I have better skills now than I did before…all I have to do is figure out what to do with them now.

8 thoughts on “The waiting is the hardest part”