I think differently with a pen or pencil in my hand. Even if I am not using it! There are synapses in my brain that only fire when my hand is holding a writing stick. I have been pondering how this came to be.

I learned to write, as most of us did, in primary school and, by the end, I wrote in a close to legible cursive. I liked to write in those days and turned out many pages of stories.

I learned to properly letter in drafting classes in middle school. I spent hours learning to print and make clear sketches. I think that is when the brain connections really started to form. From then on I always printed unless I was required to do otherwise.

When I was younger my printing was easier to read than type written. Now my hands are stiffer, especially when it is a bit chilly and my letters are more like italics, the letters tend to connect together and it takes effort to achieve a standard hand. This may be due to typing so much more, it takes different hand muscles.

I learned to type my freshman year of high school, 1976, on an IBM Selectric.The typing grade dragged down my GPA.  They made me take it because I was a girl. They said you had to be able to type to get a job as a secretary.  I passionately hated typing. I was the slowest in the class, the teacher gave me a pity grade of B for the second semester because I tried so hard.  The thought of having to do anything with typing for the rest of my life was depressing.

I was much happier in drafting class and always got good grades on my lettering. I was even happier in physics where my clear sketches and printing and, believe it or not,  thinking skills, were appreciated. I stopped writing stories.

In college an electric typewriter was a requirement, word processors were starting to peak over the horizon, but they were harder to use than some programming languages are today (does anyone remember Word Star?) and there was no computer access to speak of. I wrote everything out, turned it in printed  if I could get away with it and painstakingly typed out if I couldn’t. But I was glad I had learned to type: I took a computer programming course and it made inputting  programs much easier. Many of the guys hadn’t been forced to take typing and I had a bit of an advantage.

Slow forward to today: I still brainstorm, outline, sketch and doodle with a pen or pencil, even though I have a  blazing peak typing speed of about 20 words a minute. I think that having a holistic idea of what I want to say scribbled on some bit of paper helps me to compose. That said absolutely nothing beats a computer for ease of editing.

So here I sit at the computer with a writing stick and pad by my right hand. Even if I don’t use it it helps me think.

In response to The Daily Post’s writing prompt: “Pens and Pencils.”

In this photo my son’s puzzled look about how to handle a gift chicken is amusing an African man.  The formal presentation of chickens was one of many new experiences for us.

On our first trip to Africa in 2012, as part of a very small NGO, we received many chickens.

At first it was puzzling, since we obviously were not going to take these souvenirs home with us. However, we eventually realized that the gifts were really a form of hospitality. 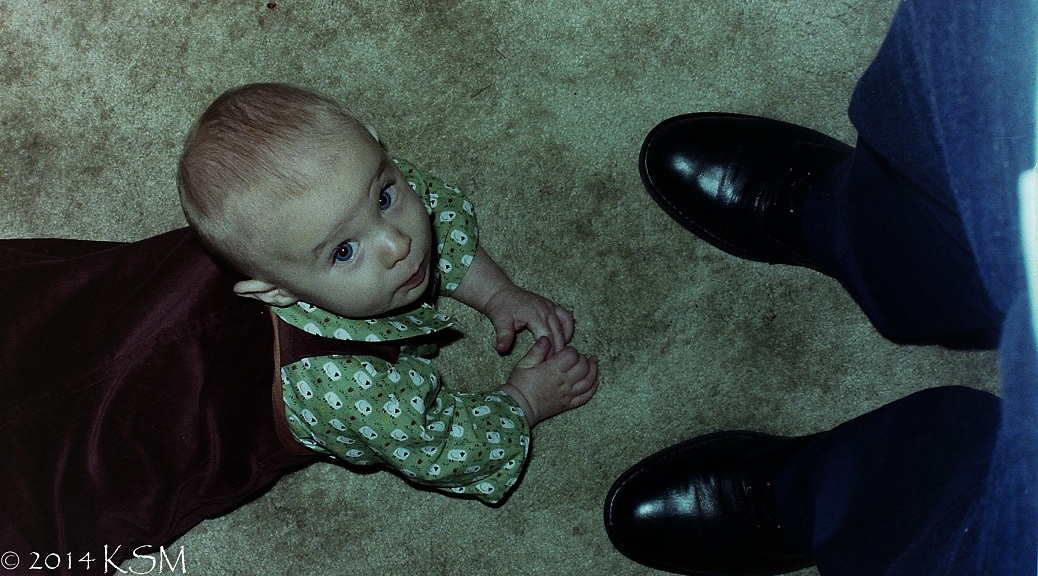 I have always wondered what my son was planning when he saw his father’s shoes and looked up.

My heart stopped, then beat so hard I could hear it. I didn’t want to leave to get help: what if it gave my card to someone else? I tried to to ask for help (any Mandarin I might have been able to pull up in calmer circumstances had evaporated so this was harder than it sounds). I did have the presence of mind to take this picture.

One helpful soul pointed to a phone number on the screen. I called it, pressed the number to get an English speaker…and got a recording in Chinese. Finally, I got out of the way and watched. After two people successfully used their own ATM cards (and didn’t get mine back) I sought out the airport’s help desk.

I showed the woman at the help desk this picture and she called the number they had for that bank. Her reply was that  no one could help me until 9:00 a.m. I was told I could come back then and she would call for me, or I could go downstairs to the branch ofice that would open at 9:00 a.m.

I sat on the end of my luggage cart (I travel pretty light so there was room) right in front of the door to the branch office, by now it was around 8:00 a.m.  Since I had a little time, I got out my trusty Lonely Planet Phrasebook and found this phrase: “the ATM took my card” (qukuanji chile wode ka).

When the armed guards with the bank employee bringing in a suitcase walked around me I didn’t approach them, but didn’t budge either. The next emplyee that came I did approach: I just said “excuse me” (I tried to learn some Mandarin before the trip but it always evaporated when it would be useful) and pointed to the phrase in the book. She seemed concerned and went in and brought out another employee. I was able to show him this picture on my camera screen and zoom in to read the ATM identification number. He went off and was soon back with my card.

If I understood (a big if) the reason for the ATM’s appetite was a safety feature: I had tried too many times (I couldn’t get English instructions to come up on the screen and kept guessing wrong about what stuff meant).

All of this happened before 9:00 a.m.  I caught the first bus of the day to the south train station. I got where I was going as if nothing had happened! 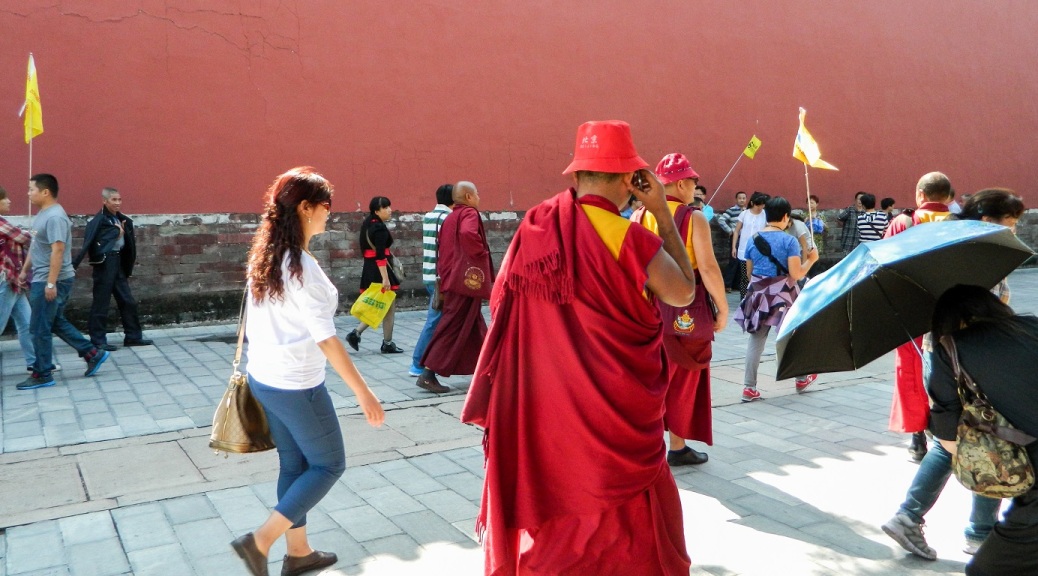 Challenging my prejudices and expectations.

We got a big smile out of this Buddhist monk and his companions on our trip to Beijing. We saw them several times as we wandered through the Forbidden City and again on Wangfujing Street.

In response to The Daily Post’s writing prompt: “Vivid.”

Kites on the waterfront.

I love the US Postal Service!!!

We take the US Postal Service for granted, and often grumble about it, but it may be that the ability to send things to people and know they will get there without tampering, prying, or undue delay is a big part of what makes the “first world” first.

Today the world is a smaller place than it was when I was a student in Boston, MA back in the early eighties. My family is all on the west coast and the cost of homesick phone calls was a significant part of my budget. My own son has lived, and is living now, in places much farther away. To call him in China using Skype costs next to nothing (1.1 cent per minute). I can send him pictures in no time using email and, if he happens to be someplace with broadband or wifi,  video chat with either QQ or Skype for free.

But getting a physical package or letter to him is another story.

In Japan, 2007-8, we had no problems, the US Post Office has a flat rate box that would get things to him in less than two weeks. In Kenya, 2011, we were told: “don’t even try” for anything more than a greeting card, and “nothing is private”. You sent mail care of someone who had a post office box in town, usually a family member or friend who either lived in town or went there on market day. They would deliver when they got a chance.

China has a postal system but folks don’t seem to have mail boxes or regular delivery. Both DHL and the postal system need a phone number, which they call and arrange a meet for delivery.  I am sure that any package just left would be viewed as abandoned and taken. Experience has shown that DHL, in spite of what is advertised and charging a pretty hefty premium ($210 versus $85 for the same package) does not get things there any faster.

Back to the good old USPS.

For the first time ever I went to see the Gingerbread Villages displayed at the Sheraton in downtown Seattle each holiday season. It made me sorry I haven’t got there till now. I almost didn’t make it this year. Saturday I went downtown to do it and the line and crowds overwhelmed me and I left. Today it wasn’t crowded and most of the people there seemed to be from preschools and daycare centers. The young children added to the sense of fun, and it was easy to see over their heads for a good view.

Each “village” is based on a song. The details in each were both fun and amazing.

I’ll Be Home for Christmas

Seattle Underground-Money going down the drain.

Home, Sweet Home for the Holidays.

No Room at the Inn

Santa and the Mrs. in the Sun.