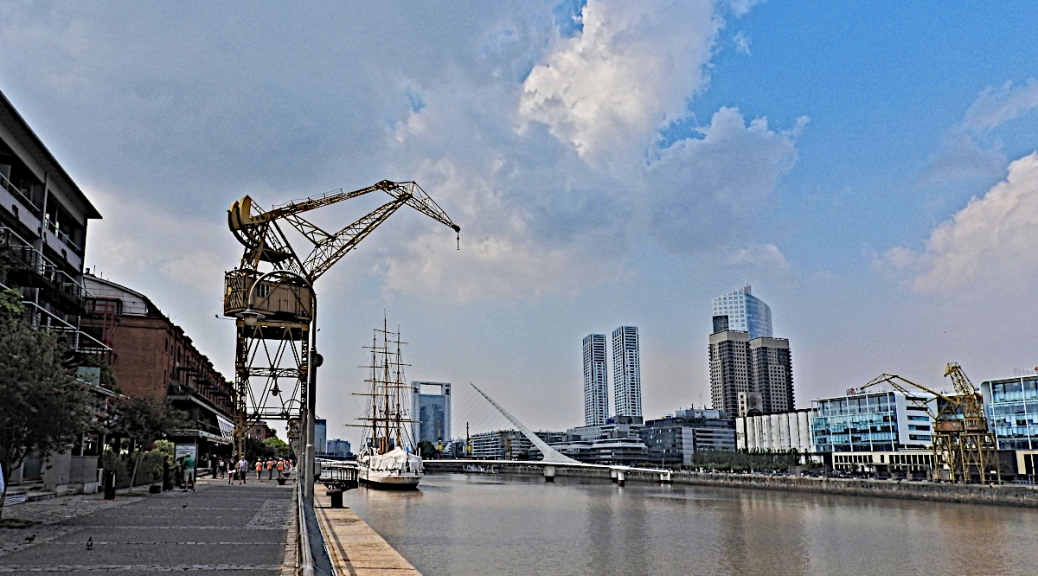 These old cranes decorated the Puerto Madero area in Buenos Aires, Argentina. My dad, an old crane engineer was thrilled to see them and kept saying what a good idea it was…and talking about how expensive it had been for the Port of Seattle to get rid of it’s cranes of the same vintage.

For Mind Over Memory’s Sculpture Saturday. I came across this charming local guy with his cup of Yerba Mate, watching all the tourists as they go into the La Boca neighborhood in Buenos Aires, Argentina. We were there in January of 2017. Doesn’t seem like three years should go by so quickly.

For Mind Over Memory’s Sculpture Saturday. 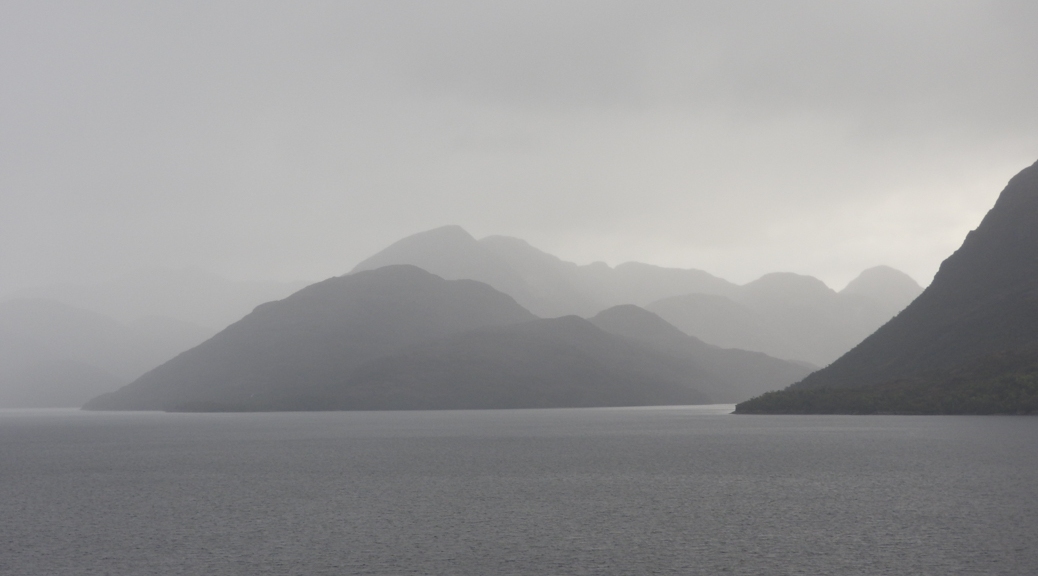 Today is Twelfth Night, the eve of Epiphany. Which, loosely, means seeing the light. In my backwards look at 2017 it is January.

In some ways my memories of last January are clear, in others less so. There was so very much to take in. A year ago I was in Buenos Aires, Argentina boarding the Norwegian Sun for a cruise around Cape Horn to Valparaiso/Santiago Chile.

It was an amazing trip and I never pulled my pictures and thoughts together to post about it. So here is a whirlwind tour of our whirlwind tour.

Buenos Aires was what I think of as a conglomerate city. It is huge both in population and size, but made up of neighborhoods. It is bright and refined; old and modern; and crazy and conservative at the same time.

Subway station and both old and new buildings near the center of the city. 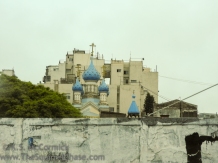 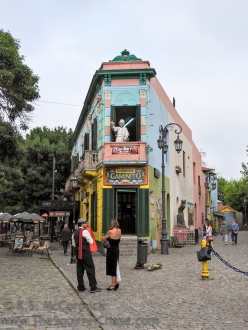 La Boca in the morning.

La Recoleta Cemetary is in the heart of the modern city.

Puaerto Madero, the old port area has been revamped into a modern, trendy area, but keeps its maritime heart.

Beunos Aires seems to pivot about the obelisk.

Modern graffiti on an old building.

A highlight of our time in Buenos Aires was a day trip to the Parana Delta. There are many islands and channels, no roads and electricity. Everything comes and goes by boat. They have gas boats, grocery boats. Even though the water is brown it is not polluted, just “clean dirt”.

Water taxi, more like a bus, transport for locals.

Distant view of Buenos Aires from the Parana Delta.

We only really got a grasp of how big the city was from the water of the Rio de la Plata, which is so wide you can’t see across it! This picture doesn’t do it justice, it goes at least as far as the eye can see in both directions. 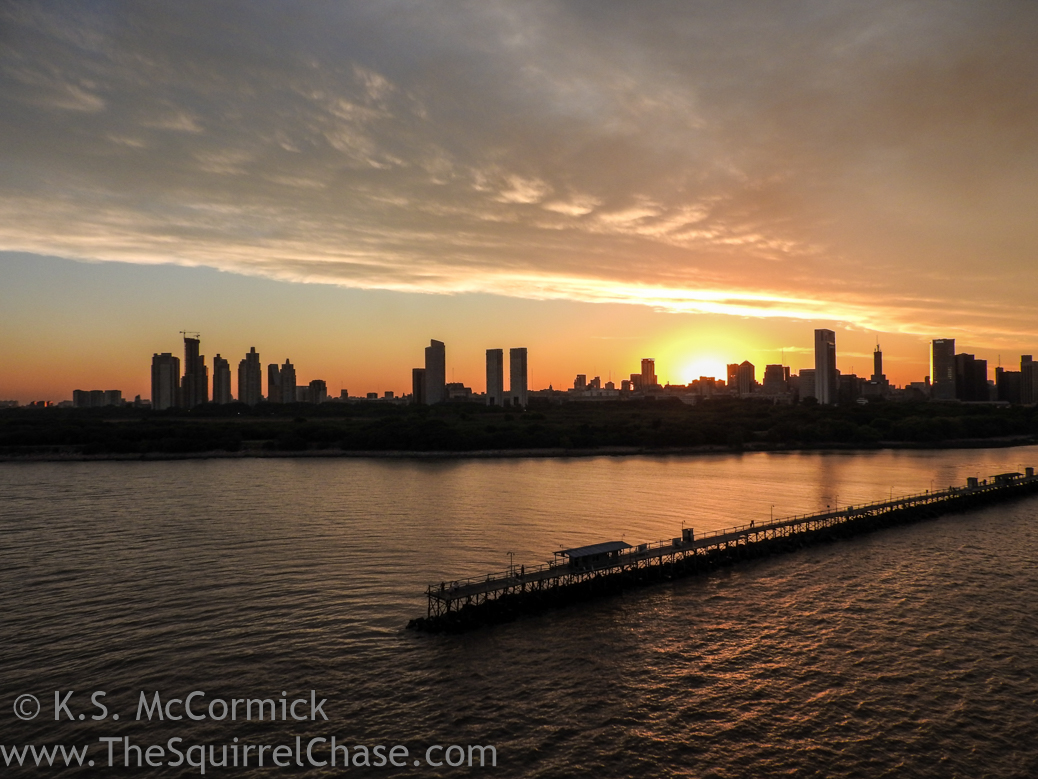 The first port of call was Montevideo, Uruguay. We hung aboard the ship mostly with a brief walk into the old part of the city near the dock. We needed a rest day after Buenos Aires. 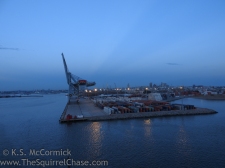 View of Punta from where the ship anchored.

Followed by a day at sea and a stop at Puerto Madryn. We were able to take a trip to Peninsula Valdes, a UNESCO World Heritage Site for its wildlife. An incredible variety of species live on the barren peninsula. The lad is so salty that the lamb meat doesn’t need to be salted.

Because of the distances we didn’t get much time in any one spot but still saw a lot.

We had a day at sea between Puerto Madryn and the Falkland Islands. We saw wales but I didn’t get a good picture of them. In the Falklands we took a four wheel drive tour out to Volunteer Point which has colonies of Magellanic, Gentoo and King Penguins. At one point I wasn’t sure we were going to make it back, but it all worked out in the end.

Kings heading out for a swim.

The next day we were at Cape Horn. The spot is renouned for having the worst weather in the world but we were blessed by three foot seas. Some of the staff said they had been there in 30 foot seas (I’d have been pretty blue!). It’s easy to see why the area is so treacherous in stormy conditions.

First view of the Cape from the distance.

Lighthouse in the forground and glimpse of the albatross monument in the distance.

Zoomed in on the lighthouse.

View of other islands in the archipelago.

Next stop was Ushuaia, Argentina, on the Beagle Channel. This is the port from which many of the expeditions to the Antarctic head out. We took a boat trip east on the Beagle Channel to Estancia Harberton, the “Uttermost Part of the Earth”, then back through the mountains of Tierra del Fuego.

Les Eclairs Lighthouse, if you look closely you can see sea lions.

View from Estancia Harberton toward mountains.

Leaving Ushuaia the ship sailed west along the beagle Channel through the Avenue of the glaciers.

Punte Arenas, first stop in Chile, we just took a bus into town and wandered about. It is a colorful town. 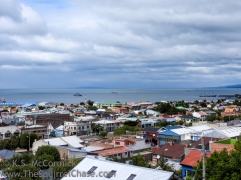 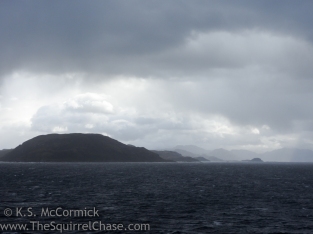 Puerto Chacabuco was tiny, we took an excursion to Coyhaique in hopes of see the Andes, but the weather didn’t cooperate. Still it was pretty. 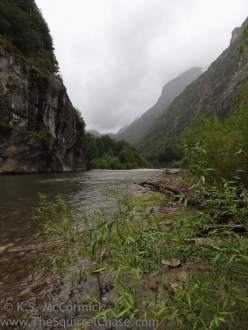 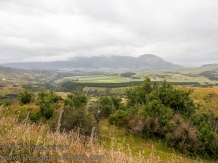 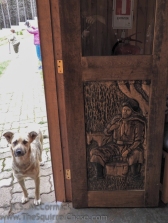 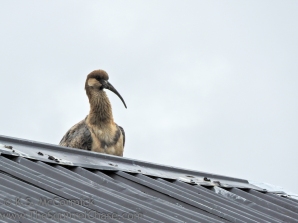 Next was Puerto Montt, again the weather didn’t cooperate for see the Andes:

However we did see some great scenery lower down, especially Petrohue Falls, Lake Llanquihue and Puerto Varas. 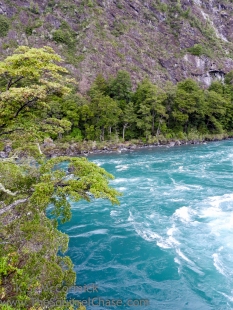 Last stop was at Valparaiso, Chile. The tour/airport transfer was a whirlwind through Valparaiso and nearby Vino del Mar then across the Andes to Santiago. Thwarted again from seeing the Andes: Smoke from forest fires prevented seeing the mountains. There was really too much to take in (even too much food). 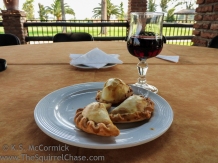 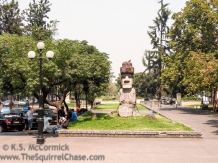 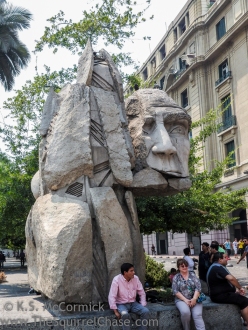 You have to get home sometime, but it would have been nice to take that day a little slower, especially since it ended with a very long wait at the airport, we couldn’t even check in because they don’t staff the desk until a couple of hours before your flight.

All in all it was a great trip. We got home on the 22nd and the only other thing I remember is that my son arrived on the 23rd for his Chinese New Year break. 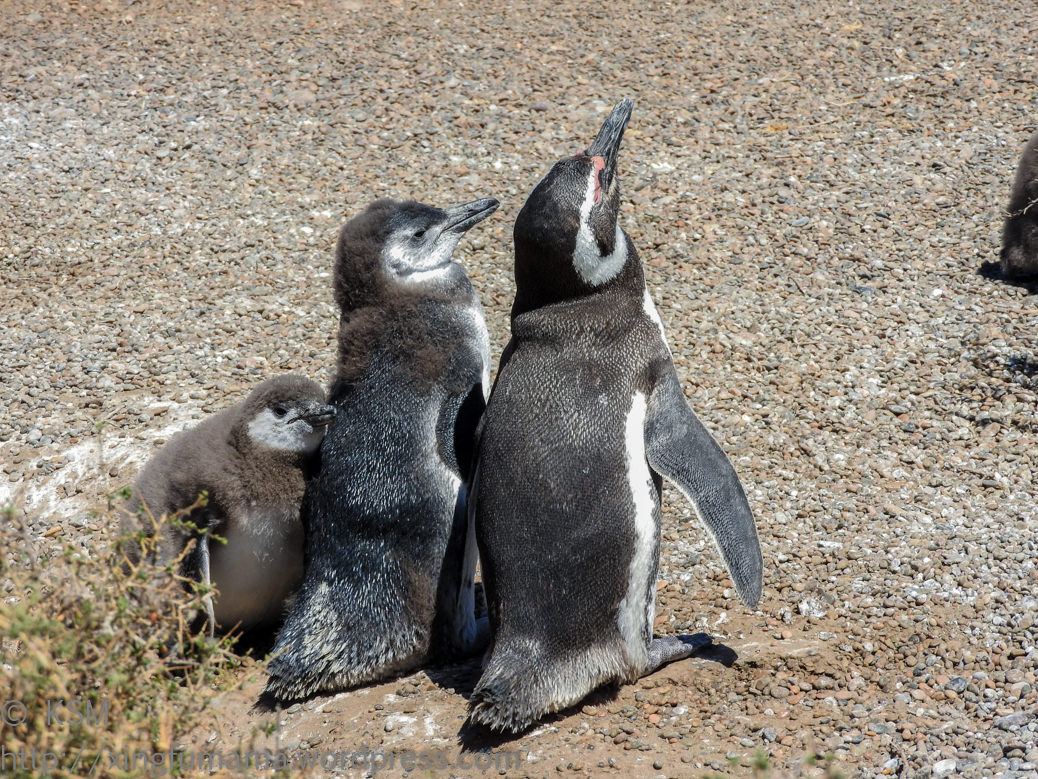 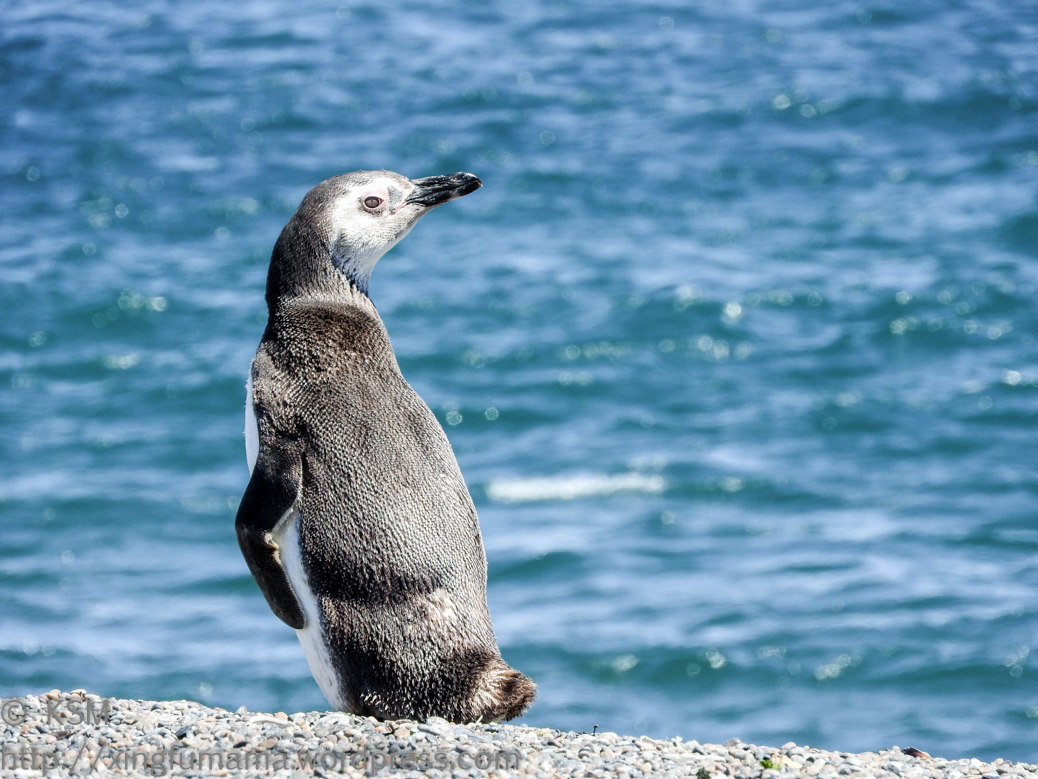 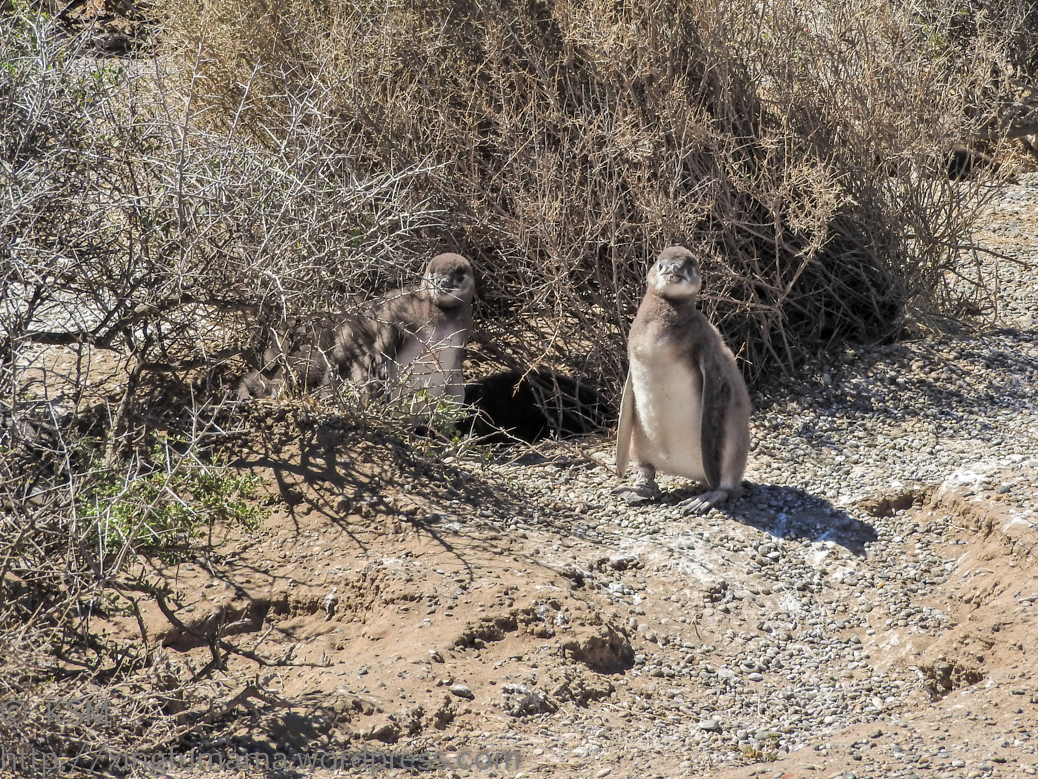 A summer project: watercolor effect on a photo of a bee on a rose of sharon flower.
Midsummer blues: Johnson's Blue Cranesbill Geranium.
A visitor in the tree.
Enjoying the sun in their new summer haircuts.
Nootka Rose on a drippy May afternoon.
Our native Nootka roses are blooming. I wish I could share the aroma.
Tranature