Most people “do” this 14 or so mile stretch in one day. The walking is pretty easy and even I could have done that (although it would have been a stretch), but we took two: Carlisle to Crosby-on-Eden, then Crosby-on_Eden to Lanercost Abbey.

We did this in order to backtrack a bit and spend the morning at the Tullie House Museum in Carlisle. This was a very worthwhile stop because we learned quite a bit about how to recognize the wall and the earthworks near it when un-excavated-which is most of the way. It made the walk into a sort of scavenger’s hunt. 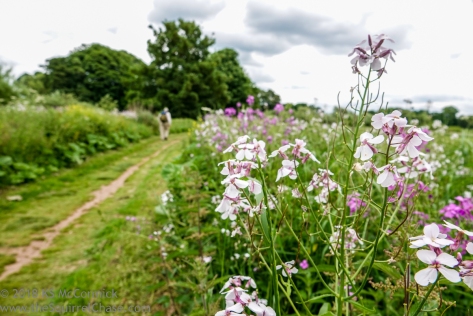 It is a nice walk through Cumbrian countryside. The tower in the picture below is a folly, not an ancient fort.

The weather was okay until we got to Crosby-on-Eden, then the wind came up. Overnight it really blew, and the next day was blustery–good English weather with lots of atmosphere. It was in the stretch between Crosby-on-Eden and Lanercost that you start to see the signs of the earthworks and un-excavated wall. The only parts of the wall itself that you see are the stones re-purposed in churches, manor houses, etc along the way. 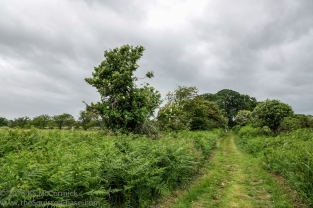 In this stretch you are walking on un-excavated wall with the defensive ditch running by your side.

Passing though farms and fields of buttercups.

As you leave the river the terrain is no longer flat, but sometimes that is because of human activity. 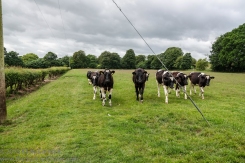 These young bullocks seemed to be saying “and don’t come back” to me. They had followed me across their field.

The sun came out at the end of the second day.

The end of that section, Lanercost Abbey, a lot of the stones for the Abbey were initially part of Hadrian’s wall. 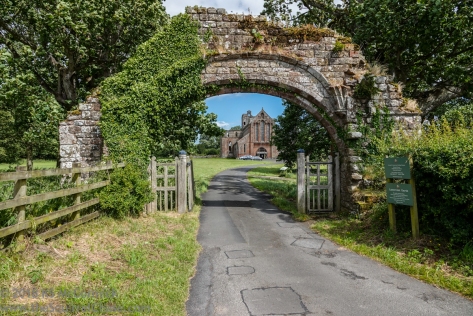