Different views of Shibaozhai. A very impressive sight whichever way you look at it. The entrance to it would have been underwater once they filled the reservoir for the three gorges dam, but they built a coffer dam to protect it.

Part of a series of posts about my experiences on a trip to China in October 2015. The series of posts related to this can be seen on my page “Sleeping Dragon Slowly Opens One Eye”.

In the middle of the night I received an email saying “no we really couldn’t get you train tickets.”

These little quests do matter: four and a half hours in a smoky hard sleeper at the beginning of a trip is fun, especially when followed by a night in a comfortable bed. Very different from the same train ride late on a day when one got up to watch the sun rise, then spent the day on one’s feet with a pack on, arriving just a few hours before one has to go to work.

So before we started exploring we found the office that sold train tickets…padlocked.  Inquiring at the tourist information office next door we learned little except that she seemed surprised that it wasn’t open. She kept coaching her son in math during the interaction, which went a bit like this:

“You want train tickets? That is next door. What is three plus four?”

“They aren’t open? They should be. If you think six is the answer to three plus four you will not do well.”

We decided to try a little later since she seemed surprised that it wasn’t open yet. Our planned route changed not a bit:

We used the hour to explore Dai Miao. It is a Taoist temple to the God of Taishan. It is very old and includes a small palace for the emperor to stay at when visiting the mountain to perform key rituals. It is a large area with a lot of interesting things to see. Too many to try an capture in pixels in an hour or so. Here are a few that caught my eye. 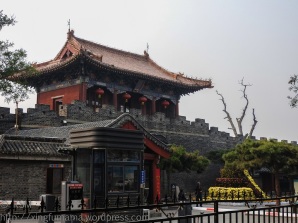 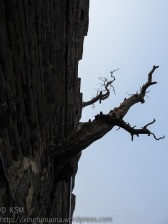 Snag in the temple wall.

Entrance to a bonsai garden. 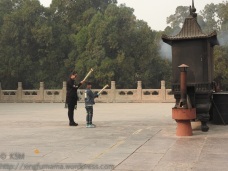 Mother and child paying respects to God of Taishan. 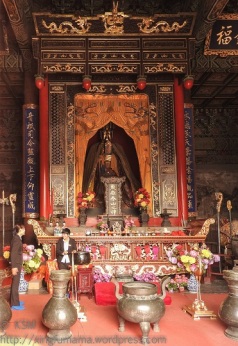 Shrine of God of Taishan. 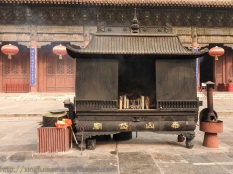 My favorite snag viewed from top of the wall beside the north gate.

Back of the north gate.

From Dai Miao, just like emperors, Confucius, and even Chairman Mao we began our journey up Mount Tai.

With the much desired fast train tickets in our possession, leaving at a very civilized 4:30 pm, which would allow us to both enjoy a leisurely morning on Tai Shan and arrive in Weifang at 6:20 pm, with plenty of time for hot showers, uniform washing, and a good night’s sleep, we approached the mountain with an “it’s all good” attitude. Surely, if we could get train tickets we could do anything?

You guessed it: to be continued.