Welcome to week 2 of Pull up a Seat. Take a load off and share a favorite perch by linking your post to this one, either with a comment or pingback. For more detailed directions go to Pull Up a Seat page.

Thank you to everyone who is participating. It is really fun to see all the different ideas conjured up by the theme.

Here are my photos for this week. They take a sober turn. I almost cried when I saw this and realized that someone had built a makeshift shelter from two dumped sofas and some other desert trash. 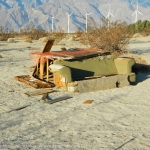 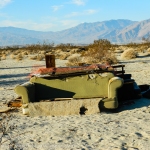 I took these photos in late August, in the desert, in an area where people, especially contractors, dump many things in order to avoid paying the fees at the local landfill. It appeared unoccupied, so hopefully its builder found a safer refuge from the elements.

Over to you (hopefully on a happier note).

This Is Your Song

From the Brandi Carlyle song Late Morning Lullaby on her album The Story:

Even though, on the whole, my life is pretty good, and I know it. I sometimes fall into depression, usually triggered by “the numbing sensation of everything I lack.” Not materially. It is a feeling of being overwhelmed and unable to cope. Other people seem to have so much more energy, strength, stamina and enthusiasm. They also seem able to have tidy homes.

For the last couple of years, a frequent depression trigger is feeling stuck in a quagmire of stuff. I am great at sorting and having it ready to leave, but “it’s not garbage anymore” (slogan for Seattle Public Utilities), so you can’t just throw things away. You have to figure out what class of things they are and take them to the correct place. I have a real problem with that hurdle. A lot of times I just stop but, when I do try, my husband goes through and finds something I put in the wrong bin…making me feel like I can’t get rid of anything. (He seems victorious when he finds things in the wrong place. I think is is because he knows his obsession with garbage is a bit odd and wants to justify it, not because he wants me to feel in adequate…but it does make me feel unqualified to get rid of trash.) So I can’t get rid of anything and he won’t.

The book about tidying up I mentioned in a previous post, The Life Changing Magic of Tidying Up, really made me feel it. She seems to measure success in how many trash bags of things to get rid of. But if those trash bags never get gone they just create a “weight on my chest and a ghost on my back and a numbing sensation of everything I lack”. Ancient cities, like Ninevah,  buried themselves in trash. Maybe someday archaeologists will dig out our house. I wonder what they will think.